An item practically  since they were toddlers, Axel Jacobs and Ann Els De Smet decided to start a rock band out of pure boredom in the summer of 2016. After a long vetting process Simon Crombé joined the band in 2018, mainly because Ann thought he smelled like a newborn baby and Axel liked the fact that he could keep down his liquor. Bieke, a legendary punk from Limburg joined the band in 2019. That’s right, he has no last name. Just like Madonna or Cher.

The band is named after one of the patrons of the city they live and work in: Halle (near Brussels, Belgium). Also it is the name of the street where the music and artwork is created. Always wanting to be a person of faith but failing because he was taught not to, Axel thought St-Katharina might be an appropriate band name. Legend goes the deeply religious Saint Catharine of Alexandria was tortured brutally because she refused to be the concubine of the roman emperor. After they decapitated her the city was overflowed by milk streaming out of her neck, curing the citizens from the plague.  Ann still isn’t entirely convinced though. They didn’t ask the opinion of the other members of the band.

In January 2018 they released the debut EP Aurigny/Alderney. It was extremely well received by family and close friends. True, it was snubbed by local and international press, but that was mainly due to the fact that they didn’t really do any promotion or send out a press release. Feel free to write a review. You know you want to.

Aurigny/Alderney refers to an island near the coast of La Roche in La Hague, France, a place where Axel and Ann go for inspiration and relaxation. They liked the ambiguïty of an island having two names and imagine it to be a place full of goblins, elves and other magical creatures. They really want to visit the island someday but probably won’t. Both Aurigny and Alderney are tracks on the EP.

The EP was released on the birthday of Ilya, their first and last born son. Their daughter Yoko will feature on the cover of their upcoming full album, set for release in 2019. All recording is done in the eating room and the living room is their current rehearsal space. So it all is very much a family affair. Yoko and Ilya are the first and only testaudience. Sometimes they hum melodies trying to influence the songwriting process. Hoping for royalties. 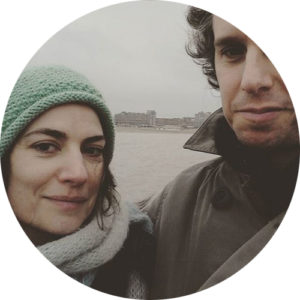 BUY OUR DEBUT EP ALDERNEY/AURIGNY ON BANDCAMP. DO IT. 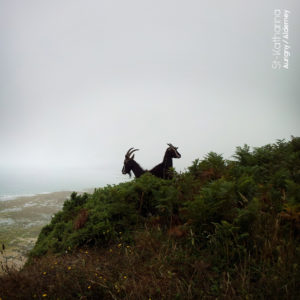